I discovered the excellent Venn diagram resources by Mr Barton in September but am ashamed to say that have not implemented one into my lesson until today. All I can say is WHY DID I WAIT SO LONG?

The lesson that I was teaching today was types of numbers e.g. prime, squares, cubes, factors, multiples etc. I know this sounds like a lot to cover in one lesson but this was for a year 9 class (starting the GCSE course) and so the text book suggests that only 1 lesson is needed on this. I predicted that due to my class being year 9 and being exposed to types of numbers throughout other topics that chances are they would have quite a firm grasp on these concepts and so I wanted to use a resource that would challenge them and make them think about the numbers. I didn’t just want them to regurgitate the numbers and sit and write them out several times, I wanted a problem solving exercise. Enter Mr Barton’s Venn Diagrams.

The first part of my lesson was a recap over the different types of numbers and ensuring that my students did indeed understand what these numbers were and iron out any common mistakes that tend to happen e.g. 3 squared is 6 not 9. Once we had done this and I was happy that they did indeed understand the main concepts, I placed a Venn diagram on the board and told the students that we would discuss this together.

The Venn diagram is a three way Venn diagram with the headings: more than 10, even numbers and factors of 30 (the dots that you can see are actually letters). I gave the students 2 minutes to discuss with someone near them which letters they would out in which sections and told them we would then discuss it as a class. I then asked the students to share their ideas which was really nice as the class discussed together whether they agreed or disagreed with certain entries. It was interesting to see that some students found it difficult to fill in the exact middle as for some reason 30 is one of the factors of 30 that some of them forget. Once we had done this and I was confident they all understood how to go about the activity I placed a further 2 Venn diagrams on the board for the students to complete in their books, one again they could discuss their ideas with the person next to them.

The first diagram had the sections: square number, factors of 36 and multiple of 3.

The second diagram had the sections: prime number, triangle number and cube number.

The first diagram posed some interesting questions for my students. For example, one of my students had placed 9 in between factor of 36 and multiple of 3. When I asked them why could 9 not be placed there, it took them several moments to realise that 9 was actually square. Another point on the diagram that posed a dilemma was a square number that was also a factor of 36 but not a multiple of 3. It was interesting that it took some of my students quite a while to remember that 1 was indeed a square number. Due to this diagram taking about 10 minutes in the end for most of my class to complete, not many if them reached the second diagram.

I am contemplating using this as a started or perhaps as part of their homework, as I do certainly believe that my students gained a lot out of this activity. The problem solving element is excellent and certainly turns a topic that can at times be mundane and a matter of rote into a task that makes students talk, collaborate and still practise the basic elements.

There are Venn diagrams for lots of different topics, go to http://mathsvenns.com/ to find them. I highly recommend trying one of these in your lessons, a very worthwhile activity. Thank you once again Mr Barton!

If you would like to see my whole lesson it is here: Types of numbers

Rachel Mahoney Retweeted · Mr H @FourfieldsMrH
7 hours ago
My Y6 find T-Tables hard. This is not the fault of their old teachers! They just find them tough! Every maths lesson they get a challenge sheet like this! Learning by rote works to a certain extent, but I am a huge believe in context. @Suchmo83 @MissSDoherty @gareth_metcalfe https://t.co/ycT1qfgOn9
View on Twitter

My Y6 find T-Tables hard. This is not the fault of their old teachers! They just find them tough! Every maths lesson they get a challenge sheet like this! Learning by rote works to a certain extent, but I am a huge believe in context. @Suchmo83 @MissSDoherty @gareth_metcalfe pic.twitter.com/ycT1qfgOn9

Rachel Mahoney Retweeted · Emma McCrea @MccreaEmma
7 hours ago
Having an effective seating plan is hugely important. In the past, I've struggled to give specific and concrete advice to trainees about the features of a powerful seating plan so am thrilled to come across this from @Inner_Drive https://t.co/Ui2Tjs0yko https://t.co/nyENKCRgsy
View on Twitter

Having an effective seating plan is hugely important. In the past, I've struggled to give specific and concrete advice to trainees about the features of a powerful seating plan so am thrilled to come across this from @Inner_Drive https://t.co/Ui2Tjs0yko pic.twitter.com/nyENKCRgsy

Rachel Mahoney Retweeted · Ben Gordon @mathsmrgordon
2 days ago
1/2 NEW RESOURCE: Bar modelling through the @WRMathsSec curriculum booklet for staff CPD - shows the progression of bar modelling through year 7 to 11 with examples for each topic in each year group and some video support #mathschat #mathscpdchat 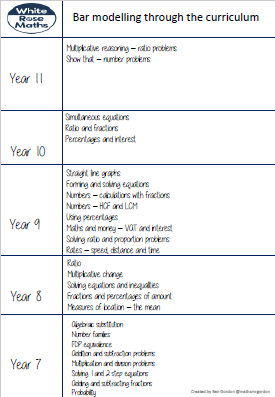